Home » Attractions » 3 Ways to Get Outdoors & Active in Sligo

3 Ways to Get Outdoors & Active in Sligo

by Jody HalstedLast Updated: September 23, 2017
This site generates income via partnerships with carefully selected travel brands and/ or purchases made through links to them. As an Amazon Associate I earn from qualifying purchases. See why this is important.

It's the county that inspired W.B. Yeats, yet Fáilte Ireland figures reveal it is the least visited county along the Wild Atlantic Way; the tourists that do find their way here pass through with quick glances through a window as they travel from Point A to Point B. With miles of inland and ocean water ways, magnificent megalithic sites, and natural wonders showing off in amazing abundance, there is plenty of reason to stay a few days to get outdoors & active in Sligo.

Outdoors & Active in Sligo: On the Ocean

An eco tour with Ewings Sea Angling & Boat Charters was highly recommended by Yeats Country Hotel. Confirming date and time, the hotel set our appointment for the evening of our arrival. Arriving at the hotel with just enough time to check in, change shoes, and grab jackets, we covered the short walk to the pier quickly, arriving right on time for our cruise.

Our skipper, Daryl Ewing, seemed to know every inch of the waters surrounding Rosses Point. His keen eye spotted porpoise and turned the boat to see if we could get a closer look. Though similar to their more outgoing ‘cousin' the dolphin, porpoise are quite shy and the approach of the boat sent him away from us. Not wanting to cause undue stress, Daryl took us further afield, past Blackrock Lighthouse, and to a shoal where seals were gathered.

With the tide in and the rocks mostly submerged, it appeared as thought he seals were lounging atop the water. One little guy was quite curious and swam toward the boat, popping his head out of the water, first close, than father away, as if he wanted us to hop in and play with him.

Touring the open water of the semi-protected ocean inlet as well as spots closer to land, Daryl was a wealth of local information. From the history of Blackrock Lighthouse, to a possibly-true tale about the Metal Man who stands guard of Sligo Harbour, to a natural phenomenon known as a tombolo, which appears as a blowhole of ocean water during certain weather.

A very personable guide, Daryl answered every question we put to him, and was especially terrific with the kids, even allowing them to steer the boat as we made our way back to the pier.

Truly a fabulous introduction to our stay in Sligo.

Another outing recommended and set up for us by our hotel was a cycling and stand up paddle boarding (SUP) outing with Northwest Adventure Tours. My little group rebelled a bit as I reminded them of this activity. I had led them on a 43km ride from Achill Island to Westport, County Mayo along the Great Western Greenway two days earlier and the thought of hopping on a bike again so soon led to a revolt. An email exchange the day before our trip changed our outing to SUP only, a relief to my grateful crew.

Arriving in the Sligo city centre at our appointed time, we met our guide Vincent at the Riverside Hotel. On a boat launch a few meters away our SUP boards rested, waiting for us to hop on for an adventure. Vincent was wonderful at calming our (ok, my) first-time jitters and after a quick on-land lesson, he set my eldest out on the first board. The others followed relatively quickly- and then it was my turn. By the time I had pushed away from the wall both my daughters were standing, quite stably, on their boards.

Our tour led us from the town centre and into Lough Gill, where we made our way to Beezie's Island, a small island that was inhabited until 1951. A short land exploration, and we were back on our way to the city centre, the trip a bit more challenging as we were heading upstream… Nonetheless, we managed to impress Vincent and complete the entire journey (though my youngest did get towed back on the return trip- the adult paddle proved a bit heavy for her after a while).

After all that work you're likely to be hungry – and I highly recommend the Conservatory Restaurant in Riverside Hotel. The food is delicious and the views of the Garavogue River, which you have just come off, are a relaxing way to end your adventure.

Outdoors & Active in Sligo: Amazing Spots to Explore on Your Own

Our final day in Sligo was set for self-adventure of a few of the area's best known sites- and one we had only just learned about.

Our first stop the table mountain of Benbulben. As the day launched with heavy fog- not optimal for even a minimal climb with kids- we opted to view the mountain from the Gortarowey Looped Walk. Parking in the forest lot we ventured along the wooded path to a wider road, which offered beautiful, if heavily clouded views, of the mountain's most distinctive cliff.

It felt like we were driving around Benbulben as we made our toward Glencar Lough, a natural border between Sligo and Leitrim. The carpark proved easy to find, at lakeside, and offered a nearby cafe, restrooms, and playground. The short walk to the waterfall led us along the clear and rocky river that runs toward the lake, stony drops and rapids leading to the ‘big show'.

Though not the largest waterfall I've seen, the sheer curtain of water seeming to drop from the trees into the tranquil pool was perfection.

Next on our list to conquer was Knocknarea, the fabled burial place of Queen Maeve, warrior queen on Connacht. As the day had progressed from cool and foggy, the sun burned away the clouds, leaving a very humid, warm afternoon. The walk is noted to be strenuous and steep and my girls were dragging before we reached the kissing gate at the base of the mountain. Surrendering to the humidity and the determination of my youngest to not go another step, we didn't make it to the top to view the passage tomb, though we would see it from a distance later on.

A secret spot awaited us after our failure to climb Knocknarea. With only vague directions offered by our SUP guide the day before, including “it's around the road to Knocknarea” and “the overgrown entrance is across from the well”, we went searching for a location known locally as The Hidden Glen. Finding the gate proved the most difficult part of this expedition and, after driving a 2km stretch of road at least 3 times, we spotted the overgrown path across from the nearly obscured well.

Sliding the metal gate to the side, and carefully returning it, we followed the footpath, a bit soft in spots, to a geological oddity. With each step into the lush vegetation the air became noticeably cooler, the pathway a bit more mucky, and the sunlight a bit less powerful. And then, there it was. Truly, a cleft in the Earth.

The sheer rock walls, rising 60 feet in some spots, are said to provide perfect acoustics for impromptu concerts, but the afternoon we arrived found the glen in complete silence. The few streams of dappled light would sparkle off dust in the still air, leading one to believe that they had just seen a wee faerie. Indeed, a flash of something larger seemed to dart in front of me as I wandered, dancing to my daughters' laughter as they enjoyed a tire swing someone had rigged over a strong branch, and I don't know that anyone can convince me that I wasn't in the company of the fae.

Had it not been for the hungry midges who were enjoying the flavor of our salty skin we might have remained in this magical spot indefinitely, missed visiting our final spot.

Carrowmore Megalithic Cemetery, an OPW heritage site, is home to one of the most densely populated complexes of megalithic tombs in Ireland, as well as home to some of the oldest, dating back to 3700BC. The cemetery is home to at least 30 passage tombs in various states of survival, while at least 25 more are known to have been destroyed since 1800. The tour is self guided, and the visitors centre has a laminated guide available to borrow which lists information on all visible tombs. Tomb 51, the largest tomb on site, has been excavated, revealing a roofed central chamber and a megalithic art.

With a good eye or decent camera lens you can see Queen Maeve's cairn atop Knocknarea to the west.

After only a couple days being outdoors & active in Sligo you'll see why so many Irish holiday here- and wonder how so many tourists miss it! 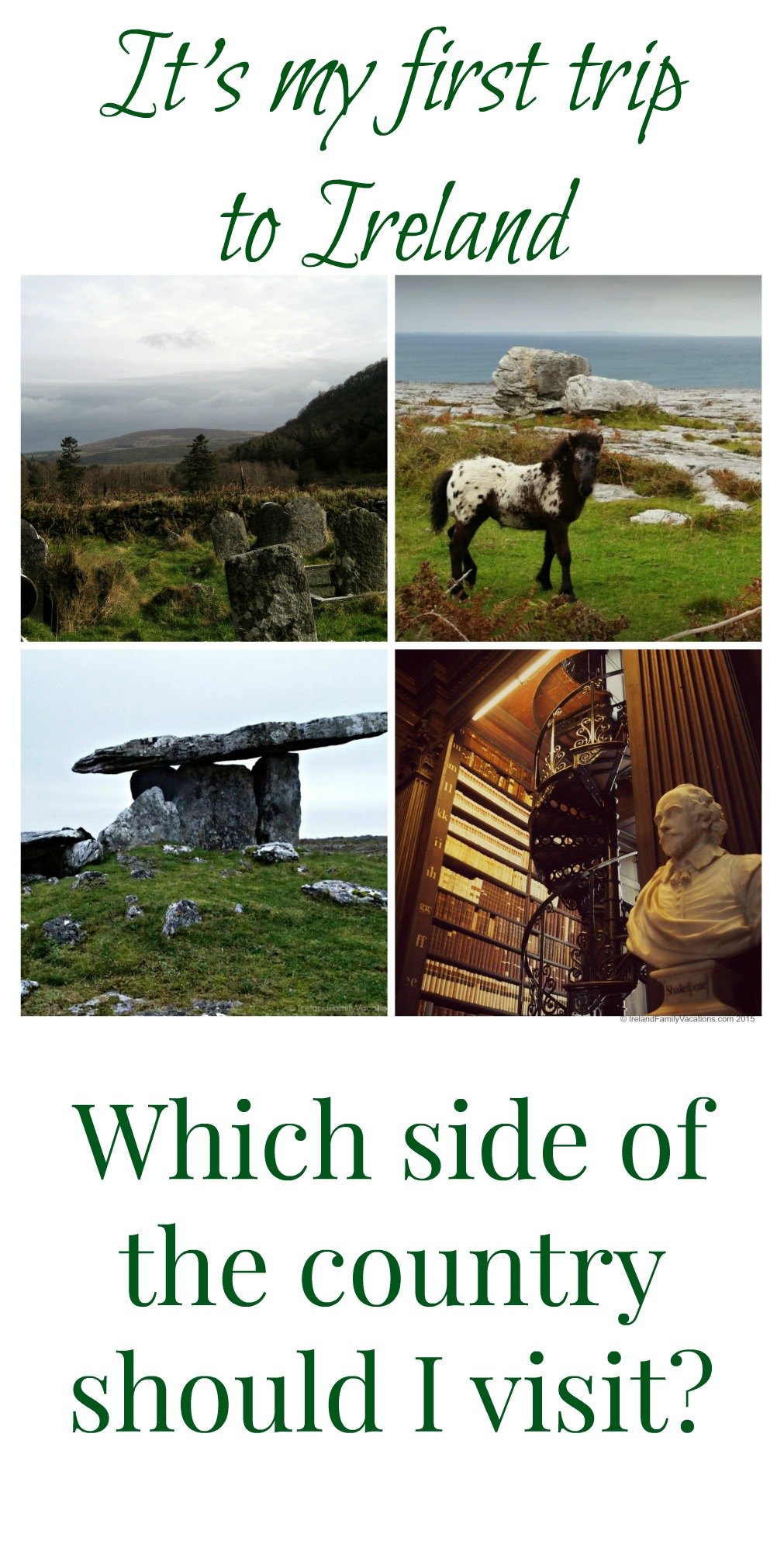 Ireland Travel Question: Which Side of Ireland for a First Vacation?

Reader Question: If you had to choose one side of the island for your first visit, which would it be? This is a great...

Visiting the Cliffs of Moher

The Cliffs of Moher has been one of Ireland's top tourist attractions for at least 200 years.  O'Brien's Tower was built as a viewing... 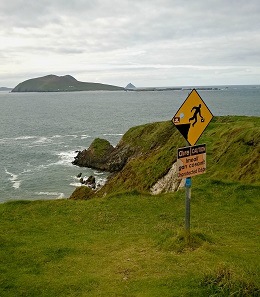