Be Sure to Visit the Irish National Stud

by Jody HalstedLast Updated: June 10, 2013
This site generates income via partnerships with carefully selected travel brands and/ or purchases made through links to them. As an Amazon Associate I earn from qualifying purchases. See why this is important.

Horse racing is the sport of Kings, and the birthline of many winners of races across the world can be traced to the Irish National Stud in County Kildare.   Only 30 miles from Dublin, the National Stud is a terrific first stop if you've just arrived in Ireland, or a great final day exploration before your family vacation ends.

Recommended to us in the itinerary provided by IrishTourism.com, we decided to make the National Stud our first stop.  After a long flight, not enough sleep and a time change, I find it best to get active as soon as possible.  But first, we needed sustenance.

Though the Japanese Garden Restaurant doesn't serve breakfast, they have many items which make a lovely brunch.  A toasted panini with ham, a sausage roll and a slice of the vegetable quiche were shared 'round the table.  And, to give the girls a bit of quick energy, a slice of cheesecake and a yummy eclair.

Wonderfully invigorated by food and tea, we set out to see the horses.

The Irish National Stud is separated into two distinct parts:  The Stud and the Japanese Garden.  We began in The Stud.

Many pathways present themselves to you as you scan your ticket and exit the visitor's centre.  As our visit took place in late spring, we headed directly for the Tully Walk and the mare & foal paddocks.

The foals frolicked easily while the mares kept a close watch over them, steering them away from the fences when it seemed their curiosity might bring them too close.

Continuing along the path, we came to the Kildare Yard with its barns and smaller yards.  More mares and foals greeted us here, along with a handy reminder.

The horses in these smaller enclosures came close enough to pet on the nose, though mamas with foals were still protective.

Next were the stallion paddocks, where racing royalty had their own space to run and roam.  Almost as if they knew we were watching, these beautiful men would toss their heads and begin to trot, then gallop, across the grass, their smooth gait proving to us that they were well aware of their beauty.

Though you can enter the Irish Garden from the Tully Walk, I recommend the Oak Walk entrance, through the massive stone chamber.  Situated in a natural lowland, this oasis sits apart from the Stud, though it is located in the center of the grounds.  Named for St. Fiachra, the patron saint of gardeners, this garden feels natural and unplanned; every bridge and waterfall fits so perfectly.  Even the monastic cells, replicating the ‘beehive huts' built by hermit monks so long ago, don't feel out of place in this natural space. 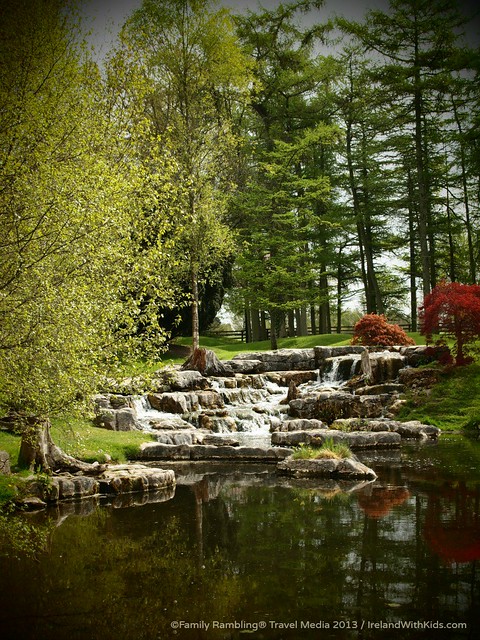 Though I loved this garden for its simple beauty, my girls were captivated by a more bold bit of nature.

We were greeted, almost upon entry, by a male and female duck.  Hoping we brought bread, they followed us along the paths and, when they needed to catch up quickly, would take to the water, finding us along another spot of the lakeside walk.  The girls were amused by the ducks' antics and a bit sad when they finally gave up on us as and went elsewhere in search of treats.

Leaving the tranquility of the Irish garden via the Tully Walk, finish your tour of the Stud at the palatial Stallion Boxes, before making your way to the Horse Museum.  Filled with all things related to Irish horse racing – including the skeleton of Arkle, the greatest steeplechaser of all time – the museum can help even those with no knowledge of the sport gain a bit of insight.

Finally, the Sun Chariot Yard houses the pregnant mares and new born foals, as well as veterinary labs and the farrier.  Guided tours begin at the fountain in the center of the yard, while the short film ‘Birth of a Foal' plays continuously in a  corner room.

All Japanese Gardens have a theme.  Some are just tranquil places to simply reflect while the surrounding beauty soothes your cares away.  Others tell a story as you walk the paths.  The Japanes Garden at Irish National Stud is the latter, sharing the ‘Life of Man' through its stone paths.

This ended up being the favorite part of the visit for my girls.  As Caelan scanned the ticket for entry, I began reading the ‘Life of Man' story.  Beginning in the ‘Cave of Birth', we began walking through life.  Once past the ‘Tunnel of Ignorance', we began experiencing the choices that life presents us with.  The easy path or the difficult challenges.  Disappointments, ambitions, and wisdom all come along the path ways of stone; some a carefree stroll, others a steep climb, but all part of the pathway to life.

Fully enjoying the tale as we wove our way through the garden, the girls weren't ready for the final ‘Gateway of Eternity' when it appeared before them.  As with life, a time to depart must come, but I can see another visit to the Irish National Stud in our future.

Tips for Visiting the Irish National Stud and Gardens

The Irish National Stud is open 7 days a week from February 1 thru November 17, 9:30am-6pm

Wear comfortable walking shoes, preferably with a ‘grippy' sole as some pathways could be slick if it rains.

Plan at least 2 hours to visit; double that for a really relaxed exploration.

Ireland With Kids would like to thank IrishTourism.com for hosting us and assisting with our itinerary for a portion of our Ireland family vacation.

Many thanks to my friend Leigh Maher who writes for the online store Irish Celtic Jewels. On his blog, he gives tips and information... 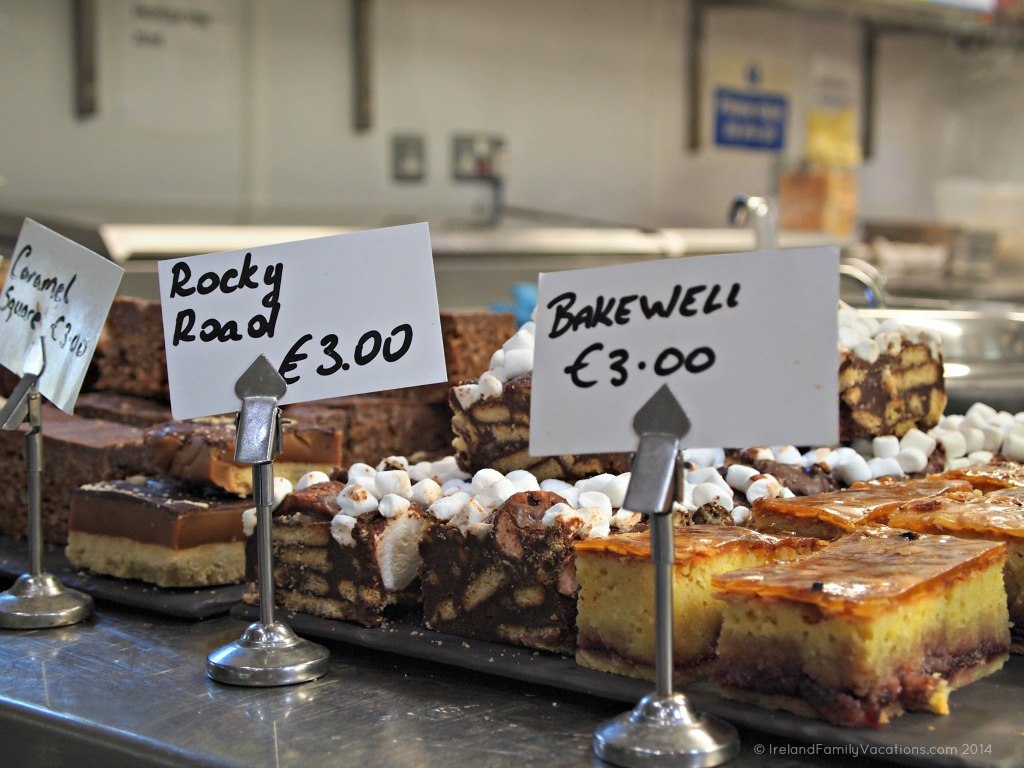 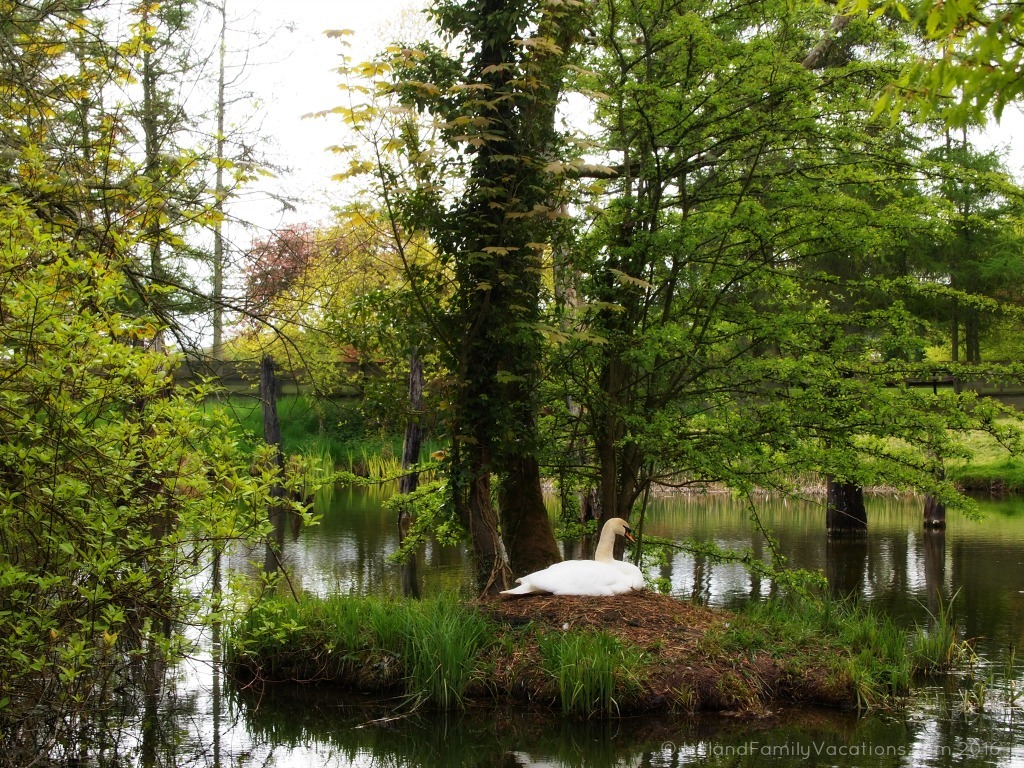