by Jody HalstedLast Updated: March 6, 2018
This site generates income via partnerships with carefully selected travel brands and/ or purchases made through links to them. As an Amazon Associate I earn from qualifying purchases. See why this is important.

This post has been excerpted from the original at my FamilyRambling site.

Glendalough makes an excellent day trip from Dublin or a beautiful stop on your way down the coast.  Kids will enjoy Glendalough for its wide open spaces, adults will love the history and gorgeous scenery.  If the weather is fine allow for time to explore.  Wear good walking shoes and allow for at least half a day.

Glendalough is about two hours south of the Dublin airport. Gleann dá locha literally means the ‘Glen of the two lakes’ as the ancient monastic community lies in a beautiful valley in the middle of the Wicklow Mountains.

If you are heading to Glendalough from Dublin I highly recommend following these directions as we used a road map and went in a very scenic back way. We got terribly lost as we missed signs that were hidden in hedgerows or could only be seen from one direction. At least it was an adventure and getting lost in Ireland is one of my greatest joys.

Glendalough was founded in the 6th century by St. Kevin, a hermit priest. It was destroyed in 1398 by English troops. St. Kevin chose the site due to it's remoteness but was soon joined by several men wanting to follow his teachings. The site soon became an important school.

As you arrive at Glendalough you can begin trail walking or view the ruins without stopping at the visitor center. The visitor's center does have a great exhibition (with interactive round tower and depiction of that the surrounding village may have looked like), a short film about the arrival of Christianity in Ireland and wonderful carved stones found at the site.  The diorama and interactive round tower were wonderful visuals for my eldest daughter who was amazed at the round tower's door being so high off the ground.  If you decide to enter the visitor center (and have other sites on your list) look into an OPW Heritage Card.  (This card covers many of Ireland's greatest sites and is good for one year from date of purchase. It can be purchased at any OPW site, the Dublin or Shannon airports and certain tourist offices.)

Directly behind the visitor center is the Glendalough Hotel. Because we were hungry after our extra long excursion we stepped in for a hot drink and some food. In retrospect I would have rather eaten from the cart serving hamburgers. But the service was quite good and the staff was wonderful with my slightly jet-lagged girls.

The monastic site sits by the Lower Lake; you enter by climbing steps and walking through a wonderful gateway arch. Tip: Walk past the tents set up to sell trinkets. You'll be able to get souveniers like that anywhere.

Most people who come to the site wish to see the wonderfully restored round tower and “St. Kevin's Kitchen”, located directly behind the visitor's center.

The round tower is 33 meters high and the entrance is 3.5 meters from the ground. The cone roof was rebuilt in 1876 using original stones. It once had 6 wooden floors connected by ladders and was mainly used as a bell tower and storage although it could have been used for safety during attacks.

St. Kevin's Church, also called St.Kevin's Kitchen, is a small and charming nave built in the 12th century. The roof is stone (a center wall in a small chamber above the church prevents it from sagging). The small round tower was used as a belfry and was added after the church was completed.

On a lovely day there are dozens of trails to walk and many more sites to see near the Upper Lake. Bring sturdy walking shoes or boots. And a stroller if you have a little one- the main trails are paved. 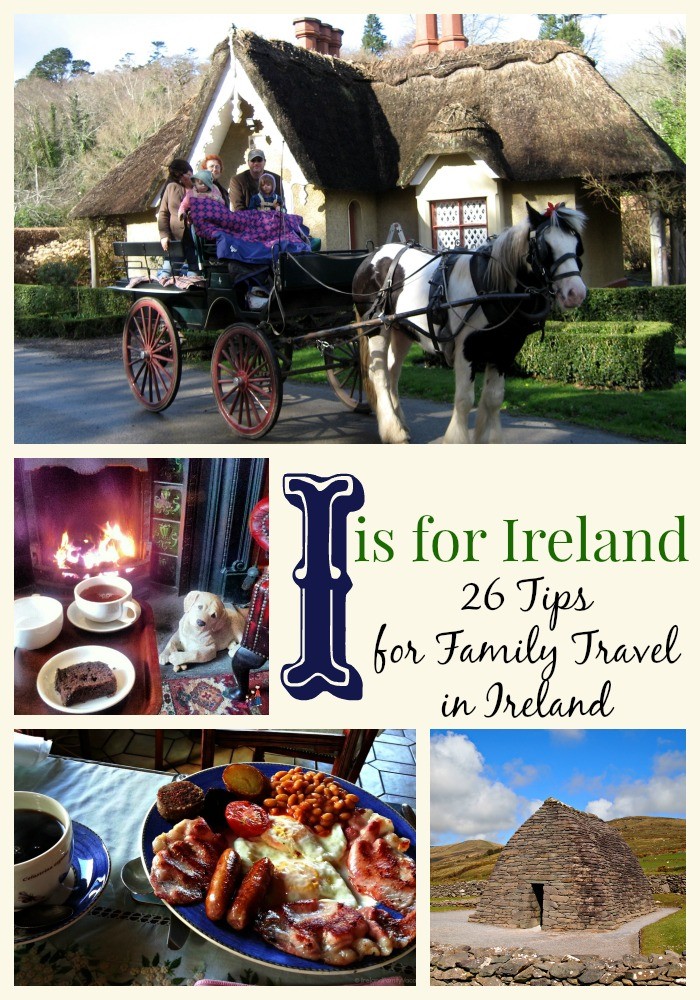 I is for Ireland: 26 Tips for Family Travel in Ireland

Yes! Family travel in Ireland is possible! No land is more filled with magic than Ireland. Even if you’re past the age of believing...

I am directionally challenged.  Even on the best of days, when the sun is rising or setting, I can have difficulty knowing east from...